Adrian Younge is not your average music producer. In fact he is far from average in just about everything that he does in his vastly creative life. The US music producer / composer/ arranger has been toiling away at his craft for years, writing and producing music and film scores for some of the most iconic productions in entertainment history. He is devoid of all the bells and whistles that are so apparent in the recording studios of today, preferring to create a sound that is much more organic and symbiotic of the sounds of the nostalgic 60’s, 70’s psychedelic soul era, focussing on creating real music, with real instruments and words, like a true musician should.

Younge is true to form when it comes to creating conceptual sound works and collaborating with the rap games revered Souls of Mischief on their new album There is Only Now, proved to be a fusion only the music gods could ordain. As a lifelong fan of the Oakland reppin hip hop outfit, being involved in the creation of this, their 6th studio album in a celebrated 20 year career, Younge has pulled out all the creative stops with this masterpiece. Recorded with no computer, no drum sampling and everyone in one room recording in one take, “There is Only Now” has raised the bar for lovers of real hip hop everywhere. With a stellar guest artist line-up featuring narrative by the legendary Ali Shaheed Mohammed of A Tribe Called Quest, Busta Rhymes and Snoop Doog, this album portrays the tale of love, loss and revenge in a fictional Oakland set in 1994 serving as a powerful listening experience. Released on Younge’s newly launched Linear Labs record label, “There is Only Now” is a hip hop album unlike anything else and for that Younge is undoubtedly proud!

When he is not producing albums. Younge divides his time between running his own vinyl record store in downtown LA called The Artform Store and writing music scores for films like ‘Black Dynamite’, which add to the rich history of African American cinematography. He is an entertainment law professor and has a discography that has lent his talents to creating with Jay Z and Ghostface Killah to name a few. A conversation with Adrian Younge is a definitive lesson on expansive creativity as he takes music production to levels filled with nuance, depth and emotion for he is the vanguard of this music and believes our journey’s should be chronicled through song. He is a marvellously expressive soul who feels and lives life deeply and it is within these characteristics at hand that he brings a higher purpose to the delivery of hip hop as we know it!

Hey Adrian – so great to connect with you ;o) How are you and how has life been treating you?

Hey there Maxine. Man, life has been treating me very very good thanks for asking …. I can’t complain! 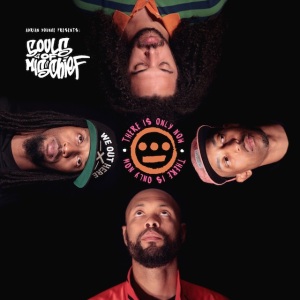 Congrats on the work you have created for the forthcoming Souls of Mischief album “There is Only Now”. I believe it is a concept album with narration by one of my favourite creators Ali Shaheed Mohammed. Can you talk to me about your creative process with this album and why you went for the conceptual route rather than the traditional album format?

Thank you so much, I really appreciate that. It is a concept album correct and with the fact of me being a composer, when I create music I do it from the viewpoint of illustrating visual themes in someone’s mind to wrap your music around. I feel as though this hits the listener harder and helps to put themselves in a situation that they may be able to recognise with. This is why I enjoy cinematic albums and with the Souls of Mischief album I wanted it to be a concept album so that I could push them in a new direction. I have been a huge fan of them for many years and they have been in the game for over twenty years now so this album was in a way, me pushing them on different path to greatness in a way. Having a concept album with a story creates a more finite storyline for everybody to write to and as a composer I have to write music that coincides with this story as well and it just creates a stronger and sharper end product and makes the album more uniformed.

My understanding of the producer / artist relationship is that the connection is almost symbiotic – you either connect or you don’t right? So what makes you as a producer decide to work with the artists you do?

Oh man I couldn’t agree with you more Maxine. For me to work with Souls of Mischief was like dream come true for me as I have been a fan of theirs pretty much since day one and know the words to almost every song they have made. They have also touched me musically for who they are and where they come from as I relate to their journey into the hip hop sub cultures. They just spoke to me, you know. Their vernacular was my vernacular and there was a connection. I always tell people that music is a connection so this journey between Souls of Mischief and myself had been one that has been going for some 19 years now as I began working with them on this project about one year ago now. We became very close and I know refer to them as my brothers so yeah our connection runs deep.

Adding to your production credits Adrian you are also an entertainment lawyer – wow – how to balance yourself between these two very different careers and what intrigues you about the legal field?

Ha-ha well I’m not a practising attorney but I have a law degree and was involved in entertainment law for many years, which helps with the music business side of things so that helps in a way.

What’s really dope about writing movie scores is that it puts you in the position where you have to enhance the visual aspect of a film through music. That means I have to create chords that evoke some sort of emotion that is similar to what I’m watching. Now in these scenarios I don’t have to worry that people outside of watching the film will like the score or not I just make whatever I feel and enhance the moment and that’s the special thing about compositions for movies it’s just different world and there’s not a lot of rules and I love that.

What are your thoughts about hip hop today Adrian? The artists, production and message?

Well I’m kind of the wrong person to answer that question because I stopped listening to hip hop in 1997 (laughs). It was around that time that I feel hip hop started talking to a different audience you know. There was a time when hip hop was the vanguard of the music industry and then quickly became a product that was geared towards appeling to the masses and that is where it lost me, it just wasn’t speaking to me the way it once was so that’s when I got into records. I have my own record store actually in downtown LA and that’s kind the music I really enjoyed listening to. When it comes to hip hop today, it’s not that I don’t like it, I just don’t look for it unless it’s something good you know. I like my records and older sounds.

Name 2 albums you would take with you into the afterlife and why?

“Portishead – Portishead Album” and “King Crimson – Court of the Crimson King”. These two albums have inspired me and my own musical career in some fashion and has helped mould me into the artist I am.

What keeps you truly motivated to remain the awesome creative spirit that you are?

I want to be the bastion of this type of music you know what I mean. Like the vanguard of this new music and movement and the more I am doing it and publishing this type of music I am seeing a cult following for what I believe in and for me it’s all about creating this handcrafted organic sound and it’s so special to me. To me music is the most important form of art and if I could be a quintessential pioneer in this form of art I’m done, shit, I’m good and that’s why I do what I do!

For more information on Adrian Younge and Souls of Mischief visit: www.linearlabsmusic.com

Souls of Mischief ‘ There is Only Now’ Australian Tour Dates: