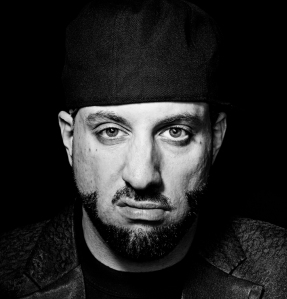 As one of hip hops most eclectic emcees, R A the Rugged Man has made it his business to verbally slaughter the opposition when they step to the MIC in his presence. With a long running and far reaching history in the hip hop game, R A the Rugged Man holds his own as one of the fiercest lyricists in the community.

Hailing from Long Island New York, RA Thornburn aka The Rugged Man began his music career at the age of 12, fine tuning his craft till he became a part of a nine label bidding war for his skill at the age of 18. He eventually signed with Jive Records, but parted ways before the release of his first album “Night of the Bloody Apes”. From there R A has built a globally successful rap career working alongside peers Mobb Deep, Wu-Tang Clan, Kool G Rap and DJ Quik to name a few and has featured on the iconic hip hop label Rawkus in three of their illustrious SoundBoming series of albums.

R A has remained consistent in his craft , building up an enviable resume appearing on and collaborating with some of the industry’s best, fast becoming an industry best himself with the release of his album “ Die Rugged Man Die through independent label Nature Sounds in 2013.

Not one to pigeonholed, R A is more than just a rapper. He is also an active boxing commentator and film critic and have written for the likes of Vibe, King XXL and The Source to name a few. An avid horror movie fan R A has written three screenplays with cult film director Frank Henenlotter and has also started on his first directorial debut, a film which is loosely based on his family, “God Take, God Give”.

As R A prepares for his return visit to Australia in coming weeks for a national tour he takes some time out to talk about what his journey has been like in this game and how he remained consistent and relevant with hip hops constant ebb and flow. At his best R A is raw and true to the underground rap game that has awarded him close to rap god status over the years. This multi-talented rap legend, boxing enthusiast, movie producer, director, and screenwriter is hip hop at its best, straight up no chaser!

Great to talk to you Rugged   – how are you and how is life treating you?

Life is treating me well. I’m eating. I’m living. Could be worse.

Tell Australia a little bit about who R.A The Rugged Man is, where he comes from and your role in the hip hop game today?

You have been touted as one of the most pioneering indie hip hop artists around, hustling hard to get your music played and heard, even pressing your own vinyl, in the beginning of your rap journey? What has the journey been like for you RA and how did those early years on the grind shape your career and yourself personally as a man?

The indie game is a blessing and a curse. It’s a blessing because you have one hundred percent freedom to make music you want to make. When you’re stuck with a corporate label situation you have to make bullshit they want you to make or they won’t promote it. On the flip side the curse is that your entire career and team is you. You have to make every step of the way happen. If you don’t do it no one else has real money invested in you so nothing is going to happen. So sometimes doing every aspect of your career one hundred percent on your own slows up the momentum of making music. Also you can make some masterpiece records and you don’t have the outlets to get it heard the way less quality records get when they’re topped into the machine. I prefer doing it my way but it is an everyday battle and every step is up hill.

You have and continue to work with some of the greats in hip hop. Can you give us a glimpse into the creative mind of who you are when you lay down a track, what inspires you and ultimately what you hope your music’s message will be in the end?

I’ve worked with most of my idols Rakim, Chuck D, Kool G Rap. And so many legends of the culture. As far as the “what my message is in my music” I don’t have to say that in an interview, just put the records on that I make, they speak for themselves. I got a different message every day, whatever I feel when I get in the booth that’s the message you get in the music. 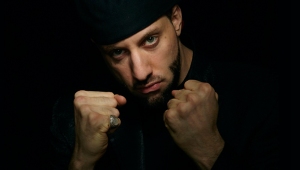 You are heading to Australia for a series of shows soon – what can we expect from your live shows?

One of the livest stage shows in the history. I obliterate stages worldwide, that is my job.

When did you first fall in love with hip hop and how has it changed for you today compared to when you first started?

I was a little kid, didn’t even hit puberty yet, and I had a high pitched voice, going from town to town battling folks in the streets. It was at the time when Long Island reigns supreme over the game. It was Rakim, Public Enemy, De La Soul, EPMD changing the game and I saw them succeeding and doing it big. EPMD was from right around the corner from where I went to school. I remember hearing Big Daddy Kane shout them out on Young, Gifted and Black and EPMD had already sold gold and was huge but hearing Kane shout them out solidified them in my mind. (laughs). Not sure why. But nothing changed in my approach since those days. I make the music I want to listen to and I make what I want to hear, and what I want the young fans to hear. I don’t let bullshit fads and trends sway the way I approach the booth.

What are your current projects / releases?

My latest video is “Media Midgets” off the Legends Never Die album. If you haven’t seen it it’s a must see. And I’m getting ready to drop the video for “Shoot Me in The Head”. My favourite video off the last album was called “Still Get through the Day”. If you haven’t seen it you gotta check it. It’s very personal and very real. A lot of folks told me that video made them cry and that the song saved their life. I’m very proud of that one as well

Four albums you would take with you into the afterlife?

1) My favourite album of all time is GUY. Classic R&B album when Teddy Riley and Aaron Hall were getting along. It’s the album I listened to the most in history and can still listen to over and over again. Not sure why but that’s a definite.

2) Brand Nubian – One For All – I thought it had everything, lyrics, beats, game changing flows, personalities, knowledge, introduction to Sadat X and Lord Jamar and Grand Pubah in his prime. I think it’s one of the best albums ever.

3) Maybe I’ll go for the cliché answer and bring a copy of Paid in Full with me too. Can’t go wrong with the classics.

4) A little Sam Cooke. Maybe a greatest hits record. A little old school soul calms the crazy beast inside of me, relaxes my brain.

Where can we find out more about RA the Rugged Man online?

The same place you find out about everyone else google. I update and interact with fans a lot on my Facebook page R.A The Rugged Man Official Page as well. And I got RA the Rugged Man.net. All of that that good shit. Instagram, Twitter. YouTube. I sound like every other rapper now. (laughs).

How did you come up with your name, especially Rugged Man – is there a story there?

For more information on RA the Rugged Man visit:

Catch RA The Rugged Man on Tour of Australia in May: