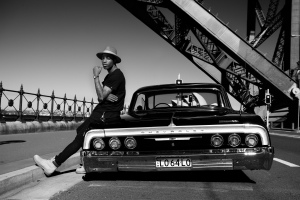 He is the South Sydney Hip Hop artist that is breaking new ground in the urban music community with the release of his debut single “All Falls Down”. Jeriet Dwight is a force to be reckoned with. Jeriet or JD as he is locally known, has been chasing his dream of hip hop infamy as long as cares to remember, putting in the work since his teens when Hip Hop become the soundtrack of his life. It has been a challenging path for the talented rapper, whom has finally stepped out from behind the shadows for his turn on the mic.

JD, raised in Austria for most of his young life before moving to Australia, is fast becoming the name on everybody’s lips with the release of his “ All Falls Down” single, produced by famed Australian hip hop producer Cam Bluff ( Illy, Hilltop Hoods, All Day ). The single is gaining traction across hip hop and urban radio shows across the nation and with Triple J giving Dwight the “Unearthed Artist “ blessing earlier this year, things are definitely looking up for this super talented songwriter and rapper. JD has kept himself busy penning the songs of many local artists over the years, perfecting his craft and biding his time to come out as a recording artist in his own right. After securing a single deal with Central Records for a feature track a few months prior to the release of his debut “All Falls Down”, his anticipated EP “Better Late Than Never”, which features collaborations with Aussie favourite Miracle and a slew of other hip hop artists, is set for release before the end of the year, proving to have been a non-stop ride in dream making for this proudly independent recording artist.

Whilst Dwight is still relatively new on the urban music roster, he is undoubtedly grooming himself for a hip hop career that will wave the flag for authenticity, consistency and above all accountability as he lays his life on the mic for all to hear. Already keeping company with some of the most notable and respected artists and producers in this country, Dwight knows the power of working with like-minded people who make good music and love what they do simply for the love of hip hop. What the next year holds for JD is one that will shape his very existence as he emerges into the music industry with a sound and flow that is ready to be heard. Everybody deserves to have their dreams come true in one shape or another and with hard work, ambition and humility as the driving tools, those dreams become a reality. For Jeriet Dwight that time has arrived and as we read on below in his open and candid interview, he has indeed arrived at his intended goalpost better late than never!

Hey JD – great to speak with you. How are you and how has life been treating you lately?

Hey Maxine, I am good thank you, it’s nice to speak with you as well. Life has been fantastic lately things are definitely looking up.

Congratulations on the success with the release of your debut single “All Falls Down” earlier this year which saw you land on the Triple J ‘Unearthed” radar. Can you describe who Jeriet Dwight is and what your style and sound is all about?

Thank you very much. Well Jeriet Dwight is kind of a nomad but everywhere he goes he goes with a purpose of giving people hope and belief in their aspirations and dreams. My sound is kind of an edgy hip-hop style with melodic hooks and occasional indie vibes.

You are a South Sydney boy who has been a fan of hip hop for longer than you can remember. You have penned tracks for some well- known local artists and gone on to perform as support act for Snoop Dogg and front the stage at festivals from Redline to Superfest. When and how did your love affair with hip hop begin and what do you see your role as being in the Australian hip hop community?

I really fell in love with hip-hop and the concept of storytelling through music after hearing Nas’ first album Illmatic. It really captured my attention. Obviously I’d heard 2puc and everyone was great but this album really hit home for me and I felt I was learning something about not only the hip-hop culture but the world itself. I believe he was a great teacher of hip-hop and I connected to that on a very personal level.

As for my role in the Australian hip-hop community; I feel it that it will be to show people how to get what they really want and that hard work pays off. With all the skills I’ve learnt I will be able to pass relevant advice to the next generation of hip-hop artists. Just by me being a part of the hip-hop music industry at the same time Nas’ was for me when I was growing up will be all I need to achieve the goal of getting the right message across at the right times in people’s lives..

You have your own EP coming out towards the end of the year called “Better Late than Never” which credits production to Cam of Illy and Hilltop Hoods fame. Interesting title for an EP – tell us what the journey has been like for you and what do you hope people will get about your hip hop message?

My journey has been a very interesting one. From a group acts to solo performances to having deals on the table and deals I didn’t even know about to having nothing and now to rebuilding and re-envisioning and coming out with my project BTLN and AFD. I mean up to now it’s been a long journey but definitely a learning experience that I needed especially coming out independently from the start. What I hope for the people to take from my message is generally just believe in yourself, teamwork makes the dream work, never take no for an answer or give up on your dreams. Really just stay true to yourself.

What are your thoughts about the Australian hip hop community and where do you think we fit in on a global scale?

At this present moment I feel like Australian hip hop is on its way to being a very influential instrument or at least that’s where I’d like it to get to so people can be inspired by us rather than us by them. I feel like right now there are a lot of great things going on in the community and industry here so the demand of this is bringing a lot more talent to the hip hop industry out here.

The artists / producers that inspire you and why?

As stated earlier Nars is clearly one + J. Cole, Kanye, Craig David and Kendrick. They’re all great story tellers who can paint pictures with their words which is what I like to do. They not only rap but they also send messages that are worth hearing and speak on relevant real things. They are community people like I am and influence the hip hop industry and culture by just genuinely being themselves.

What is the one word you associate with hip hop and how it has impacted your life and why?

Rhythm. That’s what gets me. When I hear a rhythm in a beat that excites me it’s like my mind catches onto the loop of the rhythm and creates melodies, words and concepts etc. on top of these rhythms. I don’t always know what to write about at first but when I hear the rhythm it’s all to need to get all of these melodies and ideas in my mind so I guess that’s really what drew me to the word in that aspect.

What are your future projects / collaborations in the works?

Well as you’re aware there is BLTN which is my biggest project at present but further than that I am working on something with ATP, also look forwarding to finalising more of the work done with Cam. I have done a lot my work with Dopemine, he and I have a bunch of crazy new tracks nearly ready to share with y ’all.

Something you can share about yourself that will surprise a few people?

I was raised is Austria. German is my first language so English was a second language for me when I moved here to Australia.

Your motto in life?

Single “All Falls Down” available on ITunes.