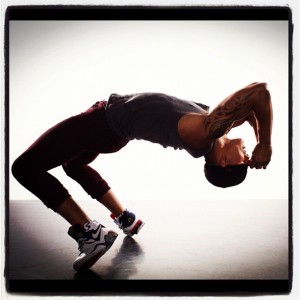 You can take the B-Boy outta the Bronx but you can’t take the Bronx outta the B-Boy! An adage that befits the enormously talented, skilled, rhythmic wonder that is William ‘Ill Will’ Sanchez, founder of the first ever breakdancing, tap dancing and comedy crew “Beat the Streets”! The crew, founded in the Sydney by the Bronx New York native is an original concept that combines the art of hip hop breakdance with the staccato injections of tap dance and topped off with an infectious comedic flow that has the audience enthralled from start to finish!

Watching the crew, which consists of five of the dance industry’s best performers, it is a heart pumping, non-stop feat that showcases not only Sanchez’ evident hip hop artistry but allows the audience to be interactive with the crew as they perform their street theatre ensemble throughout Sydney city. For Sanchez’ who started his affair with breakdancing back in 1995 under the tutelage of legendary B-Boy “Crazylegz” of the famed Rocksteady Crew, “Beat the Streets” is a dream fulfilled and an ongoing passion which continues to break new ground for his crew. Not just content with street theatre pop up shows, Sanchez is also an educator of dance and travels all over the country with his hip hop workshops teaching all levels and age groups. Not bad for the New Yorker who took a chance in 2009 and decided to relocate and explore the different areas of dance in Australia, a risk that has certainly paid off. Since arriving in Sydney, Ill Will has appeared in a legion of television commercials for companies Foxtel, Holden and Samsung, performed on ”Australia’s Next Top Model”, worked with Sony recording artist Timomatic and choreographed Stan Walker’s music video “Music Won’t Break Your Heart”, with no signs of slowing down.

Will Sanchez is the real deal when it comes to this hip hop dancing business. The man has travelled the world as a professional break dancer representing the USA Breakdancers and has performed on Broadway as well as countless movies, music videos and TV shows in the US. Having worked with international artists like Kanye West, Ciara, Neyo and Twister, Sanchez brings a wealth of industry moves, knowledge and experience to Australia’s growing hip hop dance industry. Watch his “Beat the Streets Crew” in action and you will understand that this is more than just a talented and humorous dance crew. They are a selection of the finest, fittest and funniest performers in Australia that have banded together to create something truly original and unique to come out of Australia’s dance community. A true labour of love for Sanchez, he is swiftly gaining respect in the dance industry as he continues to build on his vision of “Beat the Streets” into truly innovative and authentic entertainment company of its kind to come out of Australia. They will thrill you, inspire you and make you laugh…… but above all they will entertain you like you no other dance crew can!

Thanks for your time Will – so excited to talk to you about your amazing street theatre ensemble you have put together out here called “Beat the Streets”! I caught your show (along with your crew members) at Darling Harbour with my son and we were both blown away by your talents – can you tell us what Beat The Streets is about and how it came to be?

Thanks so much for having me Maxine! Beat The Streets is a high energy Break dancing, tap dancing and comedy show. It’s a concept that started in the streets of times square and something that I really wanted to bring to the street performing world in Australia, which is very dominated by circus acts. I decided to move to Australia in 2009 and wanted to start a new company from scratch. It began with 3 b-boys working the streets at Manly beach, I then realised I needed a point of difference to separate what I was doing with all of the other breaking crews. That’s when we decided to bring in tap dancing. From here the group grew to 5 members and everything else fell in to place. We came up with a show structure and name and became “Beat The Streets”.

You are a native New Yorker, repping the Boogie down Bronx, and have been dancing and performing most of your life in the world of hip hop breakdance and b-boy arena. I read that your mentor was the legendary ‘Crazylegs’ from Rock Steady Crew and under his guidance you have taken your career to international levels. Can you share with us those early days growing up in the Bronx and how hip hop helped carve out your destiny?

Growing up as a kid in the Bronx in the 80’s/90’s was pretty tough. If you didn’t become part of something to keep you out of trouble, chances were you would end up in a gang and never get out of there. I started martial arts in 1995 and after only 6 months I heard on the streets about some guy named “Crazy Legs” teaching at my local community centre for free, something he was doing purely to give back to the Bronx community. I went in for my first class in September of 95’ and haven’t looked back since. If I hadn’t have started dancing I would still be in the Bronx caught up in the wrong scene with the wrong people. The world of Hip Hop has allowed me to travel the world, meet some incredible people and opened my eyes as a youngster that there is so much outside the streets of the Bronx. In saying that, I’m so grateful to have grown up in a place so rich with Hip Hop culture, the Bronx will always be home for me.

You have danced in battle competitions and worked professionally alongside music stars Kanye West, Neyo and Ciara to name a few. What do you think has allowed you to remain as successful, motivated, consistent and relevant in the dance industry from then to now and beyond?

The thing that has kept me successful and motivated is my passion for dance and the ongoing support from my family in New York. I train in different styles to stay relevant in this ever-changing industry and have been lucky enough to be able to make a living out of dance.

Why Australia as your current home base? What do you see in our dance community that has encouraged you to stay and grow your Beat the Streets brand?

I first visited Australia in 2002 and instantly fell in love with the place. I came back again in 2008 and met my now fiancé. By 2009 I was living in Sydney and realised how alive the dance industry was. Beat The Streets took off almost instantly as there was nothing else like it in Sydney at the time. I was excited by the fact that I could expand myself and try other aspects of dance which I never would have had I stayed in New York. I was at the age where I was ready for change and Australia offered the perfect platform and opportunity.

Beat The Streets provides classes to the general public, teaching kids and adults the fundamentals of street dance and theatre. How has the Australian public taken to your style of dance and theatre and if people are interested in learning how do they get involved?

At the moment we don’t have a regular class. The boys and myself have been busy so find it hard to keep something regular going. However we all travel and teach workshops around Australia and hope to get a weekly class going when we get a little more time.

You are in a crew with about 5 other dancers, performers and the like? How did you choose who you wanted to align yourself with in this crew and how would you best describe their personalities, energies and talents?

I chose dancers that inspire me and are versatile. All of the members of Beat The Streets are honest, humble, creative, loyal and easy to work with. Sean is the tap dancer of the group, Stevie G is the acrobat, Kamikazi is a B-Boy who specialises in parkour, Joe Bananas is our power head and B-Boy Blond who often works with us is one of the top 10 best b-boys in the world. Each guy brings something different and equally important to the group and I’m so lucky to work with such talent every day.

Coming from the Bronx NYC you hold within you the foundation of hip hop’s Holy Grail. Your dancing career has taken you around the world, introducing you to people from every walk of life. Tell us how you still remain a Bronx boy at heart and what do you miss about your hometown?

You can take the boy out of the Bronx, but you can’t take the Bronx out of the boy! This is so true! I will always have that little ghetto in me that comes from growing up in a place like that. I still yell across supermarket isles, will always blast loud hip hop music in my car and speak a lot louder than Aussies do. I miss my loud Spanish family, the food, the hip hop culture that is EVERYWHERE when you walk around the Bronx and my good old block parties.

What are you currently listening to? The artists or music that inspires you and why?

I listen to a real mix of things. My inspirations in music are Jay Z- he has a great story of starting from nothing, something I can relate to on a smaller scale of course. Eminem- because he speaks the truth, Lil Wayne- Good beats, Kanye- true artist, Drake- for his different sound and I also love house music, good DJ’s mixing great music.

What do you think are the pros and cons between street theatre and on stage theatre or performances as you have experience in both?

Street Theatre is the toughest audience to entertain. If you can make it on the streets, I feel like you can make it work on any stage. I personally prefer street shows because it’s what I have done my whole life; I feel comfortable and love the challenge of holding a random audience. It’s exciting to bring people joy when they don’t expect it.

What does Hip Hop mean to you?

I was born where Hip Hop started, so it is a way of life for me.

For more information on Will and his Beat The Streets Crew visit: http://www.beatthestreets.com.au

2 thoughts on “From the Bronx to Sydney, Breakdancer Will Sanchez Beats the Streets!”