She hails from the African Motherland with a voice filled with soul and passion. A voice that has captured not only the ears of her homeland but has travelled abroad to tantalise the spirits of the global community. Naima McLean is a creative soul in every sense of the word. The singer, songwriter, poet and actress has worked tirelessly over the last few years to emblazon her artistic imprint on an industry as diverse and inspiring as she is, the South African entertainment community.

Naima McLean is a proud “Pan African “as she describes herself, a unique and beautiful embodiment of an African mother and American father. She is one of the greatest rising stars to come out of the South African music industry to date and with her already amazing body of work solidified, her momentum has been steadily rising in the areas of music, acting and performance art. McLean is fiercely celebrated for her powerful spoken word works and was sent to the UK on a tour facilitated by the British Council called Verbalised where she also performed her work at various corporate events on that trip. She is a member of the African Leadership Network and through her work as a social activist; her passion for education and transformation earned her the title of “Global Youth Leader”. McLean’s work ethic is undoubtedly admired and respected and she continues to add to her already bulging resume of talent and skill with a body of work that is setting her up for greatness. From performing in front of 50,000 people at the Nelson Mandela Sports and Cultural Day at Soccer City Stadium in 2013 to supporting R&B superstar Joe on his South African tour the same year, Naima McLean shows no signs of slowing down her rise.

I am so excited when I learn of the amazing artists and creative that are growing and cultivating in my original homeland and it fills my heart with pride that I get to write on a fellow South African woman whom I share the same passion and tenacity for a life in the arts. Naima McLean is an amazing asset to the African music industry as a whole and judging from the followership she received on social media for her music and performing art works as a poet and an actress, Ms McLean is the real deal. She is the embodiment of beauty, power and feminism and as the face of Levi’s® Bold Curve Jeans, she represents one of 4 dynamic Divas that not only feature in the local advertising campaign, McLean also worked closely with the Levi’s® team on the brand’s longstanding HIV/AIDS initiative, Levi’s® Red for Life. With the release of her latest single “Ride (Remix)”feat South African rap sensation Reason off her soon to be released second album, Naima McLean is paving for the way for a new musical niche she confidently coins as “Urban Soul”. She is a three strand artist who wears the titles of songstress, poet and actress like a badge of honour, an honour that is reciprocated through  her ancestry, her country and her soul! Naima McLean is the First Lady of South African Urban Soul!

Thanks for your time Naima – how are you and how has life been treating you of late?

No, thank you. It is only a pleasure on my part. Life has been amazing, in all fairness some days are better then others but on the whole I am often taken aback by how blessed I am.

So excited to learn about all the amazing things you have been doing and achieving in the South African soul music industry to date. Congratulations on your many achievements. Can you share with us learning about you over here in Australia who Naima McLean is and what your mission in music is?

That’s so amazing; I’m so excited that my music is reaching such diverse audiences! In terms of who I am…. I am the ‘First Lady of Urban Soul’, a 3 strand artist. (Singer, Actress, Poet) with a mission to touch people’s lives through meaningful music and to hopefully push the boundaries for world music coming out of Africa. I also operate through my own independent label.  -  stemming from the success of my 1st single ‘Hero’ in 2013.  I have done some awesome shows like being invited to perform the song at the Nelson Mandela Sports and Culture day hosted at the FNB stadium for over 50 000 people, as well as being asked to represent South Africa La fete L’gastronomie in Dijon, France. I was also invited to bid farewell through performance to Former Deputy President – Phumzile Mlambo-Ncuka as she took her position at UN Women (Just to name a few of my musical highlights) I am also a Pan African at heart and have performed in a range of countries across the continent, All the way from Ethiopia, to Ghana, to Nigeria and was most recently invited to perform in Rwanda at African Development Bank Award ceremony in May 2014. I’m currently working on the release of my second single “Ride” remix ft Reason 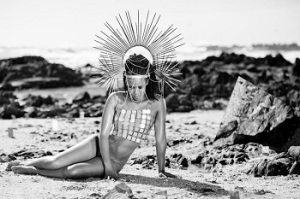 I have read on various interviews you have given that you come from a very talented and creative family with siblings living, working and creating all over the world. You are half American with your mum representing the African side of your lineage. I am a South African born woman, married to an American and call Australia home but that link back to the motherland never severs. How would you best describe your connection to mother Africa and how do you ensure she is present in your music?

Given that I live in South Africa, I always consider myself first and foremost an African. Thus my connection to this continent is integral to who I am, to my everyday existence and it contributes to who I am as a person. Because I am African, anything that I produce with regards to my music is African; the two can never be mutually exclusive therefore I don’t consciously ensure that Mother Africa is present in my music per say.

Tell us about your acting experience Naima? What types of roles have you played and who have you worked with on an international level? I read that you worked with the late Paul Walker on a movie called “Vehicle 19”?

My first international  acting project was a British series called Wild at Heart. I played a lead role called Buhle, but my first international feature film was Vehicle 19 – truly a life changing experience that changed me for the better. I hope to work on a lot more in the future. Paul Walker’s passing was devastating and quite frankly feels unfair in many regards. He was a beautiful down to earth soul and still had so much to offer. Without probably realizing it, he’s had a profound impact on my career development and for that I will always be grateful.

You have performed all over the world Naima and are fast gaining global recognition for your smooth and soulful voice, poetry, acting and music. You are a member of the African Leadership Network and have earned the title of “Global Youth Leader” for your work as a social activist. What would you say is your greatest motivation to live the life you do and how do you stay consistent and relevant in world that is always changing?

My greatest motivation is to be remembered as a woman who dedicated her life inspiring people and sharing love. A woman who managed to touch the souls of millions of people around the world and remained true to herself the whole way through. I try to remain consistent and relevant by making a conscious effort to actively engage in helping shape this continent through the many causes and organisations that are in line with my vision such as the African Leadership Network and other organisations that primarily deal with developing and enriching woman and children on this continent.

Hip Hop or Soul – which one are you and why?

I try not box myself under any genre to be honest, my music influences range from Hip hop, rock, RnB …but yes Soul would be the most significant. 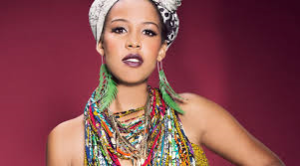 Tell us about your latest album and single release? What are your plans for releasing your music on an international level?

My album is still yet to be released, my team and I are aiming for a summer release this year. My latest single release as I mentioned earlier is a remix version of my track called “Ride” and it features SA Hip Hop sensation Reason so I am busy with that at the moment. With regards to the international market I am definitely aiming to make a significant impact, and release there but as of now its still a matter of my team and I crossing our t’s and dotting i’s so to speak.

Other than your album releasing this year, what else keeps Naima McLean busy?

Well, I still am active in the theatre and movie scene, we have a few projects in the pipeline that I am not at liberty to discuss at the moment. Other than work, I always keep busy with my Kizomba classes and I always have to make sure that my friends and family occupy a significant part of my life as they are the people who mould me and who I attribute my current success too.

In 4 words or less how would you describe South Africa and what it means to you?

Will we ever see you travel and perform in Australia?

I would love to, we just need to make it happen. So all invites are welcome … ;o)