He is undeniably one of Sydney’s most underrated hip hop DJ’s with a music knowledge that spans decades and a flow and skill guaranteed to jumpstart any party. Hailing from Detroit, Michigan but calling Australia home, DJ Crazy Caz is fast becoming one of Sin City’s most respected and recognized for his DJ cool, rocking parties and gaining a legion of fans and patrons wherever he spins.

Having called Sydney home for close onto 8 years, it wasn’t meant to happen this way exactly as Caz recalls, having initially come out here to spin for a friend’s birthday party and support a new breaking promoter. Alas the venture proved to not be a success, which saw Caz out here in veritable limbo land for a while, until Sydney started to grow on him and upon returning back to the US, he couldn’t stop coming back . Fast forward eight years and he is packing out top nightspots like the IVY, Zanzibar and El Loco to name a few and happily christens Sydney’s rnb / hip hop lovers with flawless blends, beats and loops to keep the party going.

Detroit, Michigan for those that know,  is a straight up-no-chaser kind of city, known for its ability to weather the roughest of weather, economic and political hardships in America. It is also known for its honesty and giving you the raw and real whether you want it or not. DJ Crazy Caz is the perfect embodiment of authentic djing and fearlessness with his track listing ( mixing 80’s with new school, Too Short with Jay Z ) – you get the picture. He keeps you guessing and wanting more, never leaving an empty space on the dance floor. As a DJ myself, I am always learning and inspired by those that I am blessed to work alongside and Caz is no exception. Effortlessly cool, humble and hardworking, DJ Crazy Caz is well deserved of the shine he has been basking in of late and whilst some may only just be familiarizing themselves with him now, Caz is fast becoming a DJ legend in Sydney’s hip hop community!

What made you want to become a DJ and how did you get your first break?

“I guess at the age of 8 I knew I wanted to be a DJ. I had an Uncle who had decks and I saw him get down on them a few times and I knew I had to learn.  My mother tells me soon as I was walking, I would carry her albums under my arms as if I was off to a gig. My first gig was at my Junior High school….2 hours for $50 … I thought I was big time lol”

Describe your first gig? When did you realise that this was something you wanted to pursue as a career?

“My first gig was at my Junior High School. I played for about 200 people and I can’t say I had the best time, but I knew it was not gonna be my last gig. The next few days after that made it so clear that  Djing was what I wanted to do.”

How do you stay consistent and a strong favourite by your fans in this industry?

“I can’t say I have the solid or perfect answer. I guess it’s just to say some what current with music. And maybe it’s my style of Djing. I really seem to pay attention to body language and facial expressions. It seems these days people like to do a combo of things in the venue…dance mainly but now….SING OUT LOUD is the new thing for sure  hahaha”

Who would you say your musical influences / inspirations are and why?

“My influences are old soul and funk performers. I say this due to how they had to deal with the business. Back then it was more of a struggle to be on top, so a lot more effort was not only put into the music…their live shows were the bomb as well. Being a Midwest boy I also had the privilege to see new forms and styles of music develop. So give me real singers and instrument players any day, I love that music that moves souls.”

What are the pros / cons to being a DJ, if any?

“Well the Pros of being a DJ are the way people look at you I guess. For me the look on ones face when I drop that hot or favourite track. That moment at the end of your set and half the venue comes up to you and says thank you for a great time and set. Or when the venues you work for show you they appreciate you for your work. The Cons….well that list is a very long and sometimes ugly one. But the few things I will list is LACK of pay….LACK of being payed ON TIME and some patrons in the club that disrespect the DJ and his or her gear. Oh and I do not like the groupie game as well, I makes good women act badly.”

The record that guarantee’s people on the dance floor and why?

“Hmm this is kind of a tough question to answer. Since I play many styles of music it is hard to name that ONE record that always works. I will say YOU CAN NEVER GO WRONG WITH A CLASSIC but it just depends on how it’s played or delivered to the crowd.”

What are your thoughts on the technology that DJ’s face now with all the different mixers / Serato / USB options available?

“I love the fact that technology has made it easier for use to carry more music, but at the same time I DO NOT LIKE THE USE OF ONE DECK. I can understand being good with one side but still keep the basic look of the DJ. I only see this with URBAN DJ’s…House and Dance DJ’s and even the USB DJ’s(the real DJ’s that really use mp3 and not pre-recorded sets) use both decks. Sucks now when patrons notice this sad trend. I hope this changes and we go back to looking like DJ’s and not missing an arm.” 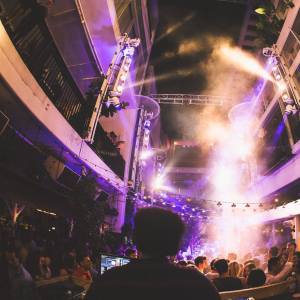 You hail from the US ( what state are you from? ) but call Australia home ……what made you move to Sydney? Did you DJ back in the States and if so what would you say are differences / comparisons between Australia and the US when it comes to DJ’s and the clubs they spin at?

“Born in the South…Alabama but I am a MICHIGAN boy for sure. I guess my story to come here is a simple one. I had internet contact over here….just a friend whom I was sending mixed CDs to for a while. Well she decided to have a party and invite me to visit and DJ a set. After being here that first weekend I knew this place had a bit of magic and I wanted to see more. After meeting so many people that first weekend I wanted to show everyone I met that I was not too bad on the decks myself. Did a few sets for some wonderful people and at that point I knew I wanted to stay here. The reason I love this place is that they love classics here, most the venues in the states have forgotten the classics. Playing old school at some places over there is shamed….people will boo you and show you their anger in a heartbeat if they not hearing EVERY NEW SONG IN THE VENUE, and 9 times out or 10 they rolled to the club playing those same damn songs lol To me…DJ are the same all over, it depends on their years behind the decks. These days you can tell how long a DJ’s history is just by how they mix.”

What are you currently working on? Your future projects?

“Currently I’m just playing the back ground and watching the club scene change like it dies every season. I just want to continue to bring smiles to faces and make souls move. Maybe team up with a person to form a DJ team….and maybe start to teach people how to DJ…just the basics only tho haha.”

What does Hip Hop mean to you?

“Hip Hop to me….HEAVEN. I see that some of the art is loss but there are some fighting to keep it alive and I for one are will to do what ever it takes to help this Army of real hip hop heads. For now the music needs a little help …but I do believe it will live forever. MY NAME IS DJ CRAZY CAZ AND YES…I AM H I P H O P!!’

For more info on DJ Crazy Caz follow him on : https://www.facebook.com/djcrazycaz