She is a child of the American Civil Rights era and the voice of a movement that stretches beyond generations. Nikki Giovanni, world-renowned African American poet, author, activist, commentator, hip hop authoritarian and teacher has and always will fight for equality and the civil rights of people not only in her native America, but on a global scale. The Emmy award winning author has penned some of the most prolific prose of 20th Century, including “The Collected Poems of Nikki Giovanni” (2003) and classic works “Black Feeling, Black Talk (1967), spanning from her early years as a revolutionary young poet on the college grounds of prestigious Fisk University in Nashville Tennessee, to standing on her own platform as lecturer and reader at Rutgers University, Ohio State and Virginia Tech University today.

Her written works have opened the eyes and minds of her own generation, to the injustices brought down upon the very leaders that have graced our history pages today, all for the fight for the right to an abundant life without boundaries. Her voice echoes the preaching’s of the great Dr Martin Luther King Jr, Malcolm X and Robert Kennedy to name a few and it is her life’s purpose to continue reaching her students and readers worldwide through her written and spoken word.

Ms Giovanni is honest and forthright in her approach to writing some of the most important literary works in African American history, engaging people of all walks of life regardless of colour, creed and culture in her powerful and positive words of reflection, acceptance and pride. Writing for everyone from birth to elders, Nikki Giovanni’s message can be heard and felt to all you take the time to listen to her. The American Hip Hop community embraces her strength and courage when it comes to addressing their youth, highlighting the power of words and working together with various artists in the industry such as Mos Def, Jill Scott and Gill Scott Heron to name a few who help put Hip Hop to work for a higher purpose.

This interview has been my highest honour in writing, researching and ultimately engaging in conversation with a woman whose purpose is one I can only hope to achieve as a writer one day – to educate, enhance, enlighten and empower. The future of our children and the paths they walk are determined by the footprints we embed today, the lives we live are the messages we hope resonate in those that follow and through the teachings of people like Nikki Giovanni, the legacies of music, culture and people will never be forgotten!

Your words, poetry and presence in African American society and culture spans back to the early 1960’s when you were a college student at Fisk University, exploring your views on a range of topics from childhood, college life and civil rights. How could you best describe those formative years and they shaped you into the woman you are today?

I sincerely think life is a series of questions not answers. Anyone can answer but it takes daring to question. I’ve always been a watcher and observer therefore I have always raised question. Whoever I am today is still, in my mind, becoming. I really like being alive and seeing the world though both my eyes and my imagination. I hope to never be a finished project.

Being born and raised for most of your early years in Knoxville Tennessee, I read that your grandmother, inadvertently, was like your muse when it came to seeking and speaking out about issues that concerned your community and your culture as a whole! Could you share with us your most vivid memory of a conversation you had or heard from your grandmother that first ignited your ‘poets’ fire?

I, like so many youngsters of my age, spent my summers with my grandparents and when I began high school I lived with them in Knoxville, Tennessee. Grandmother and I read the same books, cooked together, visited the sick and shut in and, when she could drag me along, learned from the Garden club. I was never very good at gardening and am only now beginning to have decent gardens. This year I did not plant anything but green beans, soy beans and other beans to replenish the soil. Grandmother had a green thumb and would pinch and pull on things until they blossomed. That would be me also, I think. At least I hope I have blossomed.

Going to the prestigious Fisk University, an all-black college in Nashville Tennessee unearthed the writer in you and being surrounded by so many artistic, expressive people proved to be the proper breeding ground for the magnificent career you began to forge for yourself all those years ago. What did that college experience and people that you met give you in terms of life lessons and courage to speak and write with the conviction you do?

I am of the Civil Rights generation. When I first enrolled at Fisk the Sit-ins were already in progress. John Lewis and Diane Nash were the campus leaders at that time and shortly after I arrived they were off to Anniston, Alabama where C.O.R.E. had been riding the integrated bus that was attacked and burned. John Lewis, now Congressman Lewis, and John Siegenthaler, Assistant Attorney General and Editor In Chief of The Nashville Tennessean, were badly beaten. John S. went on to be a founder of USA Today and John L. is still having an impact in The House of Representatives. Whatever we did or did not do during that era we had already committed ourselves well before college. Probably the single most significant event was the murder of Emmett Till which showed all of us that no matter what our age they would kill us. If that doesn’t make you want to change the world I don’t know what will.

Your first published volumes of poetry were reflective of your feelings garnered at the time when the assassinations of Martin Luther King Jr, Malcolm X and Robert Kennedy occurred. Black Feeling, Black Talk (1967) and Black Judgement (1968) were your earliest displays raising awareness to the black community in America. How influential have those first volumes of your poetry been to the generations that have read and studied these works and to the generation of today, who at times seem somewhat disconnected to their own histories?

I have a lot of faith in and respect for the younger generation. They face a different set of questions. I believe they are more than up to the task. I hope my sense of place is instructive to them. I hope they learn from me that all you can do is today’s job. But you must do it as well as you can.

As a South African / Australian female writer of Hip Hop and its culture I am always struck by the strong connection Hip Hop and its message has with people from all walks of life, color, creed and culture. As a poet and teacher surrounded by words and language all the time, could you describe what your believe Hip Hop’s message and meaning to be other than just another music form?

I was given your book “ Hip Hop Speaks to Children” as a baby-shower present back in 2009 before having my son – he is now 3 years of age and we have read and listened to the music with that book countless times never tiring of it and its message. What would you say would be the distinct differences, challenges and highlights you feel writing for children as opposed to writing for adults? What are your greatest missions when you set out writing for children?

I’m glad you and your son are enjoying Hip Hop Speaks. I wanted to show the true lines that connect one classical experience with another. And Hip Hop is classical. I think people gravitate to Hip Hop because it is a vernacular which tells the truth.

Have you ever visited Australia Nikki? What do you know about our country and history? We would love to see you come down for a visit one day and maybe speak at our universities?

It is my greatest desire, after Antarctica, to visit Australia. I leave for Antarctica in three weeks so Australia is definitely in my wish book. I am a big tennis fan so I have wanted to come for that; though opera is not my first choice I know enough to want to see your opera house; the Great Barrier Reef is a wonder of the world. And that’s just for starters. I’m a fan of Space and the fires lit by the native Australians were seen when the first humaned space craft circled the earth. Not to mention I had a stuffed Kuala Bear as a totem when I was way younger. I worry about habitat protection for the Kangaroos and I admire the can do spirit. There is very little to not like about your country once blatant racism was set aside. It would be a pleasure and an honor to come visit “down under.” 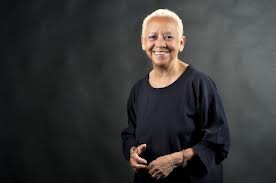 What type of Hip Hop / Jazz / Soul does Nikki Giovanni like to listen to? Which musical artists resonate with you on a creative, lyrical level and why?

I am actually a jazz fan. I listen to XM 67 most days. John Coltrane, Gene Harris, Miles when he is mellow, any Duke Ellington. And that’s just for a very quick starter. Don’t forget Cedar Walton, Grover Washington, Jr. and George Shearing. I need to stop because there is Art Tatum and Errol Garner. And any sax but Bill Evans with the old trio holds his own against Nat King Cole and his old trio. If I had my way I’d be a disc jockey and play real jazz all day long.

You have received numerous awards for your written works over the years including multiple NAACP Image Awards, Langston Hughes Award for Distinguished Contributions to Arts & Letters, the Rosa Parks Woman of Courage Award and countless honorary degrees …..When you look back on all of these amazing recognitions and accolade Nikki, what is the one thing that you have been awarded that has changed your life monumentally would you say?

All honors are good and happy events. No doubt about that. But I do especially love that the home where my Grandparents lived, 400 Mulvaney Street, Knoxville, TN, has a plaque there stating its where I found my muse, as it were. I know Grandmother would be bursting with pride if she could see that.

What are your thoughts on the Hip Hop community in the US today? From the creative aspect, to the social and political sides of the music form?

The kids are all right. I believe they need to continue following their hearts as well as their heads.

What keeps you balanced in this life? What is your mission statement?

I value my sanity above all else. I like to think I do good work. But I know a lot of folk do good work. So I am pleased when my work is accepted and recognized and I go forth when something goes in another direction. I think life is a good idea and I am enjoying living it.

For more information on Nikki Giovanni and her published works please visit:

2 thoughts on “Nikki Giovanni – Daughter of the Revolution”